A new government decree based in part on IOM’s ground-breaking research into human trafficking in the Indonesian fisheries will address chronic human rights abuses in the industry, the country’s Minister of Marine Affairs and Fisheries (KKP) says.

“The research report is the only publication that provides a complete and critical description of the extent of human trafficking and forced labour in the fishing industry in Indonesia,” minister Susi Pudjiastuti said Tuesday at a Jakarta event marking passage of the new decree and release of the report.

“The ministerial regulation creates the certification mechanism to ensure the fishing industry here will be free of human rights violations.”

The decree requiring all companies in the fisheries sector to submit a detailed human rights audit to ensure the wellbeing of fishermen and port workers comes almost two years after media reports first revealed the brutal conditions aboard many foreign vessels reflagged to operate in Indonesian waters.

Working closely with its government counterparts, IOM Indonesia in March 2015 began identifying and assisting hundreds of victims of trafficking among foreign fishermen freed from conditions of virtual slavery aboard vessels confined to ports in eastern Indonesia following a blanket moratorium on the renewal of their operating licenses.

Subsequent research based on interviews with over 1,100 trafficking victims revealed widespread and systematic human rights abuses in the industry and endemic criminality ranging from document forgery to murder, flourishing within a regulatory environment in need of a significant overhaul.

“The government is to be commended for its many efforts to address the troubling details contained in the report into trafficking and labour exploitation,” said IOM Chief of Mission Mark Getchell. “Working together with industry leaders is the best way to ensure the rights of workers are respected and that the nation can take full advantage of the economic opportunities offered by its extraordinary maritime resources in a sustainable manner.”

Formally released today, the Report on Human Trafficking, Forced Labour and Fisheries Crime in the Indonesian Fishing Industry is the first of its kind based on the detailed eyewitness accounts of men trafficked aboard fishing vessels. The Australian-funded research effort was coordinated with the KKP, with the assistance of Coventry University (UK) and the University of Indonesia.

In addition to recommending the human rights audits addressed by today’s announcement, the report concludes there is a need for greater diligence recording the movement of vessels in Indonesian waters, investment in training on human trafficking and IUU fishing, robust independent inspections of ports and vessels at sea, a streamlining of government regulations, and the establishment of a network of port-based centres for seafarers to contact their families, report abuses and seek protection.

#IUU fishing not only harms ocean ecosystems- fishers are highly vulnerable to poor working conditions, physical and sexual violence, and nonpayment of wages. @C4ADS’ Forced Labor in Fishing Database helps illuminate these cases and the ports that may be key to ending them.

News on #oceaninnovation | A new app O-FISH provides a database to rangers who enforce fishing restrictions to look up and report unlawful fishing even when there is no internet.

Find out how @MongoDB & @WildAid's app will help #IUUfishing via @nbcnews: https://t.co/6CPdnJMjaw

In today’s Unseen News : An underwater ISS for oceans studies, autonomous ships, a new record for kidnappings at sea, over 900 ships defy U.N ban and other maritime news… 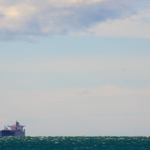