Recent media investigations have revealed regular use of forced labor in the international seafood supply chain. Here’s how the U.S. government and the private sector should respond to curtail these abuses.

The United States imported more than $34 billion in seafood products in 2015, most of which was supplied by a handful of major seafood exporters: China, Thailand, Vietnam, Indonesia, Canada, and Ecuador.1 Most of these exporting nations lack the management standards that have made the United States an international leader in sustainable fisheries management.2 As fish populations become depleted in their nearshore waters, fishermen are forced to travel farther distances for their catch. These extended trips increase industry costs, such as fuel and labor, and incentivize illegal operations as a way to make a profit. Moreover, the global growth in demand for seafood now outpaces population growth. Skyrocketing market demand puts both marine ecosystems and seafood industry workers under pressure, and the resulting environmental and human rights abuses, therefore, must be addressed in tandem.3

Until recently, there was little mainstream interest in the manner in which imported seafood is caught and transported to the United States. Unlike the garment sector, which for decades has been dogged by accusations of dangerous working conditions and abusive practices in its overseas supply chains, criticism of labor issues in the food industry has largely focused on the conditions of domestic workers in fields, on farms, and in processing plants. Over the last two years, however, a series of groundbreaking investigations by news organizations and advocacy groups exposed horrific treatment of laborers aboard commercial fishing vessels and at aquaculture sites and seafood processing plants in Southeast Asia.

These reports, which appeared in The New York Times, the Associated Press, and The Guardian, as well in publications by the Environmental Justice Foundation and other nongovernmental organizations, or NGOs, provided accounts of migrants sold into slavery by unscrupulous labor brokers and human traffickers and forced to work in abysmal conditions without pay or under crushing debt loads. Many victims—some as young as 15 years old—described routine beatings and physical confinement with chains and manacles; others told stories of brutal maiming and even execution inflicted as punishment for attempted mutiny or escape.4

These deeply researched accounts generated international attention and earned their authors a range of accolades, including a Pulitzer Prize. They also elevated the issue of labor conditions in the seafood industry and prompted one major seafood importer—Nestlé—to commission an external inquiry into its own supply chains, which found significant labor abuses.5 Perhaps most significantly, reports of slavery at sea were a major factor behind the U.S. Congress’s decision earlier this year to close a legal loophole that had allowed companies to circumvent a ban on the import of goods whose production involved slave or convict labor.6

These developments and increased global awareness of human trafficking in the seafood industry have occurred at the same time that the U.S. government and the international community more broadly have been seeking to address the growing challenge of illegal seafood harvesting practices. The U.S. response to these practices, referred to as illegal, unreported, and unregulated, or IUU, fishing, spans a range of regulatory and foreign assistance initiatives, including the creation of a supply chain traceability mechanism and a trusted trader program designed to enhance enforcement of existing bans on illegally caught seafood.7 Some within the U.S. government, including Secretary of State John Kerry and Sens. Richard Blumenthal (D-CT), Sherrod Brown (D-OH), Ron Wyden (D-OR), and Robert Portman (R-OH), have explicitly linked the fight against IUU fishing to efforts to eliminate labor abuses in seafood supply chains. 8 As Secretary Kerry stated earlier this year, the mistreatment of workers in the seafood industry “is as much a story about illegal fishing as it is about human slavery, because the illegal boats are most often where this awful treatment is occurring.”9

The rising interest in confronting illegal and inhumane practices in the seafood industry—especially through bipartisan congressional measures—provides cause for optimism that the United States and its international partners can cooperate on an effective framework to eliminate labor abuses from seafood supply chains. Measures that improve the sustainability of global fisheries through enhanced accountability and transparency—for example, by establishing a mechanism to trace seafood as it moves through complex and often confusing supply chains—can also strengthen efforts to identify and counter human trafficking at sea. Yet optimism by itself will not end seafood slavery. The complexity of the global trade in seafood products and the diversity of actors participating in the fishing sector mean that only a sustained, coordinated effort across major seafood importing and exporting nations and private industry is likely to produce a lasting solution.

This report examines how the federal government can coordinate more effectively across agencies and with the private sector to address seafood slavery. It finds that current approaches to dealing with the global challenge of human trafficking are ill-equipped to deter and punish the mistreatment of seafood laborers and that only a cross-cutting, interdisciplinary approach that situates seafood slavery in the wider context of lawlessness at sea is likely to make inroads against the problem. It also finds that key laws designed to fight human trafficking and IUU fishing are being enforced in an unnecessarily narrow and compartmentalized way. Ending human rights abuses in the seafood industry will require greater information exchange and cooperation across agencies—particularly between the National Oceanic and Atmospheric Administration, or NOAA, and law enforcement and customs authorities—and partnerships between the U.S. government and the private sector and civil society that leverage technological innovation to strengthen the global response to seafood slavery.

#IUU #fishing is a scourge that needs sustained international cooperation to curb effectivement. It is often organised international crime in combination with many other abuses and anything but a cavaliers delict @TunaFFA
https://t.co/MjJtv01wzs 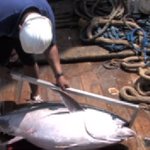 An interesting take on #BlockChain and #IUU:

"Blockchain has a role to play in securing the #seafood supply chain, but risks being undermined by “hyperinflated” claims perpetuated by the media, says a new report."

A 4 mt long female mako #shark was caught, illegally landed and about to be sold at a fish market in Italy. We must stop the killing of these #protected & #endangered species in the #Mediterranean. @EU_Mare #IUU #Italia @UN_FAO_GFCM
#seafood
https://t.co/I6W78x4Ob6