The United Nations on 6 October 2017 called for strengthening the fight against illegal fishing, the United Nations food security agency has urged all countries to join a landmark global treaty that aims to rid the world of the multibillion-dollar scourge.

Illegal fishing is rampant in West Africa’s Gulf of Guinea where impoverished coastal nations with poor capacity to police their waters lose up to $1.5 billion USD in annual income to ships operating in protected zones or without proper licenses, Environmental Justice Foundation says.
Our fish stocks and marine biodiversity are in crisis. Rapid industrialisation and poor fisheries management have meant that too many vessels, using destructive and unsustainable fishing methods, have been catching far too many fish. With fish stocks exhausted, global demand at an all-time high, vessels are now going further afield – often fishing illegally in other nations’ territories – and staying longer at sea, to bring back ever-diminishing catches.
Brima Sesay, a fisherman explained how some foreign trawlers interrupt local fishing activity. He also said that it is not only destroying their nets but at the same time preventing them from having significant catches. He noted, “Catch is poor, business dwindles.” For communities like Funkia, fishing is one of the sources of livelihood. Other fishermen complained about the tensions caused by foreign trawlers.
The Sierra Leone Fisheries law does not permit any fishing vessel to fish within 12 Nautical Miles of the Inshore Exclusion Zone or IEZ. It also forbids vessels to fish on its waters without a permit or flags of convenience. However, the Ministry of Fisheries efforts to monitor Sierra Leone waters has being a serious challenge with regards detecting fishing vessels that violate the said policy.
Illegal Unprotected and Unregulated fishing is identified as a serious global problem: one of the main impediments to the achievement of a sustainable world fisheries. According to Illegal-fishing.info, IUU fishing is worth between $10 billion and $23.5 billion per year, representing a substantial loss of revenue, particularly to some of the poorest countries in the world where dependency on fisheries for food, livelihoods and revenues is high.
Illegal trawling by foreign vessels is providing cause for concern, the Ministry of Fishing says.
Local fishermen have blamed the industrial trawlers for the disappearance of quite a number of fish species over the years. The Fisheries Ministry says it is the illegal, nylon fishing nets that are responsible for the depletion.
“They use nets with holes so small that they catch baby fish thus preventing restocking. Nets with holes that are too small are prohibited by law as a conservation measure,” said Josephine Roberts, Fisheries Officer in charge of Tombo outstation.
“The trawlers,” she said, “could be one of the issues but primarily it is the type of nets the artisanal fishermen are using. The nets reduce the species by catching the juvenile fish that don’t get a chance to grow. The nylon net is illegal. This is the reason fishers venture far into the sea. They are greatly contributing to the problem, as they go into the mangroves were the fish breed and reproduce.”
The Port State Measures Agreement (PSMA) – approved by the Conference of the Food and Agricultural Organization (FAO) in November 2009 – entered into force last June, making it legally binding on its parties to conduct rigorous inspections of vessels by port rather than flag States.
According to José Graziano da Silva, the Director-General of FAO, the PSMA is not only the “main tool” to tackle illegal fishing; it also helps to tackle other serious problems including trafficking of drugs and persons.
“We need all countries around the world to be part of the said Agreement for it to be highly effective.” 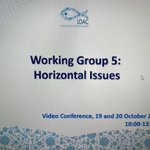 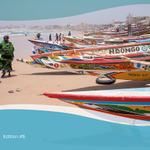 Looking forward to talk #CITES, #BBNJ and #IUUFishing with the great crowd at @maripoldata 's #oceanseminar series this Wednesday! 👇