Skip to content
You Are Here: Home / Latest News / GOG nations worried about loss of $2 billion yearly to illegal fishing

About eight African countries comprising the Gulf of Guinea (GOG) Commission, yesterday, frowned on underutilisation of the massive ocean assets, even as it decried the continued loss of about $2 billion yearly to illegal/unregulated fishing in the region.

The Gulf of Guinea is made up of the maritime area located in the western part of the Africa. The countries bordering the Atlantic Ocean are: Ghana, Togo, Benin, Nigeria, Cameroon, Equatorial Guinea, Gabon, Sao Tome and Principe, Angola, and Congo.

The nations, which converged in Lagos, at during a seminar on, “Blue Economy in the interest of food security in the Gulf of Guinea region,” charted paths to harnessing the opportunities provided in region.

At the seminar organised by the Nigerian Maritime Administration and Safety Agency (NIMASA), participants agreed that the seas and oceans in West Africa are facing serious pressure from within and outside the region.
They therefore agreed to jointly deal with the issues, by prudently managing the maritime domain and human activities that are negatively affecting the Gulf of Guinea.

The Executive Secretary, Gulf of Guinea Commission, Florentina Adenike Ukonga, said: “There is strong evidence that major ocean assets have been in steady decline for many years, many of the living marine resources are in serious decline as a result of human activities at sea, and there have not been any serious sustainable practices to deal with this serious threat in this part of the world.

“The blue economy is already faltering and not delivering anything like its full potential, at a time when the population is on the increase and the need for food and resources from the ocean is also increasing.

“It has been projected that the population will continue to increase, which requires us to do more especially the peoples of the coastal states in Africa that rely so much on the nutrients, which they get from the living marine resources,” she said.

Ukonga added: “While other countries are reaping the benefits and returns from the blue economy, West Africa for example, is estimated to be losing about $2 billion yearly from illegal fishing. Its coastal sector remains largely underdeveloped and poorly governed, which has enabled other forces from outside the continent to benefit more from it, than its citizens; a very disturbing situation. Thank God we are doing something about it now.”

She said fishing is an occupation practiced by almost all riverine populations, adding that this can be developed to the level that no importation of frozen marine living resources from outside the GOG region will be necessary for consumption, if the living marine resources are properly harnessed, developed, grown and controlled. 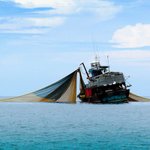