A coalition of NGOs is arguing that major seafood importing countries and Regional Fishery Management Organizations (RFMOs) need to ensure that their import regulations require the collection of 17 key data points that reveal the who, what, when, where, and how of seafood in the supply chain. Currently, a lack of data prevents cross-checking against authorization records – making it impossible to confirm the legality of imported seafood.

Among the most important information is data identifying who caught the fish, through a unique vessel identifier – ideally an International Maritime Organization number, which stays with the vessel regardless of changes in flag, ownership, or name. After that, knowing the species name helps prevent mislabeling or fraud, while knowing the catch date, location, area, and method, help determine legality.

“It could revolutionize the ability of government, markets, and consumers to understand the origin of the landed seafood, and drive change to ensure a more sustainable industry,” Burgess said. “Better aligned import controls underpin efficient trading for legal operators and help close the net on IUU fishing.”

The E.U. and the U.S. are already highly aligned with the 17 best practices recommended by the coalition, with 76 and 71 percent alignment, respectively. But countries that rely on multilateral schemes through RFMOs, including Japan, have significantly lower levels of alignment – between 41 and 76 percent.

In 2008, the E.U. introduced a catch certification scheme covering all wild-caught fish imported from non-E.U. countries into the E.U., and which entered into force in 2010. In 2016, the U.S. introduced the Seafood Import Monitoring Program, which covers 13 types of seafood that are especially susceptible to fraud and IUU fishing. Japan is currently developing its own system and currently relies on the catch documentation schemes of RFMOs, meaning it only monitors a limited number of fisheries: southern bluefin tuna, Atlantic bluefin tuna, Patagonian toothfish, and bigeye tuna.

The E.U. currently requests 13 of the 17 data-points that the report recommends, while the U.S. requests 12. Those two systems are aligned in measuring 10 of the 17 data-points, suggesting that there is ample opportunity for harmonization and information sharing between the two. Greater alignment between the two systems could cut costs for fishermen and seafood companies bringing products into both regions.

If major seafood importing countries and RFMOs fail to harmonize their import regulations, it could lead to confusion and an additional bureaucratic burden for both fishermen and seafood companies, while allowing loopholes that unscrupulous operators can exploit.

New import control systems, especially those being developing in Japan, need to be aligned with existing unilateral systems, such as those in the E.U. or U.S., Burgess said. Leading seafood exporting countries, such as Thailand, have recognized the need for close alignment on the key data elements and have embraced electronic data exchange, she added.

“The use of fully digital control systems as opposed to paper-based ones will mean less burden for fishers and companies in seafood-exporting countries and quicker analysis and better cross-checking of data in market states,” Burgess said. “Ultimately, harmonized import controls are a benefit to market states, RFMOs, and exporting states.”

Though the FAO could strengthen its guidelines, the responsibility ultimately lies with importing countries, which essentially act as gateways to consumers.

“Fishermen and other supply chain actors will already have some of this data, for example, for other compliance and monitoring purposes,” Burgess said. “But if the ‘gateway’ doesn’t ask for it, there is no reason to hand it over.”

Flags for sale! 🇵🇦🇻🇺🇻🇨 New paper led by Dr. Gohar Petrossian at @JohnJayCollege provides an empirical assessment of #FlagsOfConvenience (#FoC) use by #fishing vessels worldwide. Was a pleasure collaborating with these clever ladies! #IUUwatch #IUUfishing https://t.co/49rm1gbumf

Serious concerns of forced labour and #IUU fishing in the Taiwanese fleet - updates from the broad based coaltion "Make Stewardship Count" supported also be #Mundusmaris. 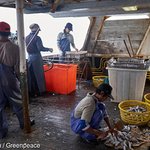