Today, on World Fisheries Day, EJF and Hen Mpoano are calling for greater ambition and transparency in combatting illegal fishing in Ghana’s waters. The livelihoods of millions of coastal people, and the food security of the nation, depend on it.

Four years ago, almost to this day, Ghana received a yellow card from the European Union for failing to tackle illegal fishing. The yellow card prompted a flurry of new laws, and a detailed plan of action for eradicating illegal fishing, once and for all. The progress made during this short period showed what can be achieved where the political will exists. To address the remaining pervasive illegalities in Ghana’s fishing sector requires a scaling up of implementation and enforcement, in line with the commitments set out in the National Marine Fisheries Management Plan.

LAWS ALREADY EXIST. WHAT IS NEEDED NOW IS TO ENSURE THEY ARE IMPLEMENTED

At EJF and Hen Mpoano, we are ready to support the Government and local fishing communities in this fight.

Four years ago, when the yellow card was issued, Ghanaian vessels were fishing with impunity far from Ghana’s shores, while seafood of dubious origin was finding its way to markets in Europe and elsewhere.

The yellow card prompted a flurry of new laws aimed especially at Ghana’s tuna industry, a key source of foreign exchange and a priority for the EU market. Monitoring and inspection systems were set up and an action planadopted, mapping a pathway to eradicating illegal fishing once and for all. Details were fleshed out in a management plan, which held the promise of reducing pressure on Ghana’s declining fish resources.

The yellow card was lifted in 2015, and this can only be put down to many different organisations working together. The government of Ghana was applauded for the progress made, and rightly so. The future looked bright.

Week after week, stories of illegal fishing in Ghana’s waters hit the national headlines. Ghana’s fisheries are in peril, threatening the way of life of over 2 million people that are employed, directly or indirectly, in the fish supply chain.

The message from the small-scale fishers is one of increasing conflict with industrial trawlers. They say that the trawlers fish close to the shore, in the zone reserved for artisanal fishers. They complain of collisions and destruction of their fishing gear and canoes. Unable to supply evidence of such encounters, they say they are rarely compensated for their losses.

In a vicious cycle, the bad practices of too many trawlers have eroded the local traditions that once regulated Ghana’s small-scale fishing sector.

Faced with dwindling catches and the illegal practices of perceived “outsiders”, small-scale fishers have resorted to their own bad practices to make ends meet.

Traditional days off from fishing that once relieved pressure on fish populations are no longer respected. Destructive methods, such as the use of lights, poisons and explosives, are now commonplace, threatening fish stocks, marine ecosystems and human health.

UNFORTUNATELY THE STORY DOESN’T END THERE

In recent years a new threat has emerged compounding tensions not only between, but also within, sectors. Under the cover of darkness, industrial trawlers sell their unwanted fish to canoes out at sea – a practice called “saiko” that is prohibited under Ghanaian law.

Thousands of tonnes of fish are sold in this lucrative trade each year, exacerbating overfishing and competing directly with artisanal fishers, placing livelihoods in jeopardy.

With most of the fish traded under the radar, overall catches are impossible to calculate, making fisheries management largely ineffective.

The issue is one of over-capacity (too many boats), on the one hand, and lack of enforcement (failure to punish bad behaviour), on the other.

SO WHAT CAN BE DONE?

Fortunately, when it comes to addressing illegalities in Ghana’s fishing sector, there is no need to re-invent the wheel. A clear roadmap exists in the form of the 2015-2019 Marine Fisheries Management Plan, spelling out exactly what needs to be done and by when. There are also laws detailing which activities are banned and how these are to be punished.

PAPER PROMISES MUST BE TRANSLATED INTO REALITY

EJF and Hen Mpoano welcome actions by the Government to implement the Management Plan but believe that these must be more ambitious, transparent and even-handed if the pervasive illegalities in Ghana’s fishing sector are to be eradicated and key deadlines in the Management Plan are to be met. The speed and scale of actions following the EU yellow card show what can be achieved so long as the political will exists.

Efforts must be directed, firstly, to bad practices and over-capacity in the industrial trawl sector. This includes reducing the number of boats, implementing closed periods for fishing, and ensuring boats that repeatedly flout the rules are not re-licensed.

Only when this threat is removed will it be possible to bring about any lasting or meaningful change in the behaviour of small-scale fishers.

Until then, fishing communities will continue to blame external forces for driving them to illegal and destructive ways of fishing.

Overcoming illegalities in the small-scale sector will be no easy task. Thousands of canoes are dispersed across more than 500km of coastline. It will never be possible for Government authorities to be everywhere, all of the time.

Luckily, mechanisms already exist in the communities of Ghana, that if reinforced could mean enforcement becomes easier to manage. This includes ensuring Chief Fishermen take enforcement action at the local level, with the support of Fisheries Watch Volunteers, and that this is enshrined in the law.

EJF and Hen Mpoano are ready to support the Government and local communities in this fight.

Together, we will be working with small-scale fishers to reduce illegal fishing and support fishers to participate in fisheries co-management. This forms part of a three-year, EU-funded project entitled Far Dwuma Nkɔdo or Securing Sustainable Fisheries.

We will build the capacity of fishers to report illegal activities and support communities to reinforce traditional mechanisms for law enforcement.

Small-scale fisheries contribute significantly to national GDP and employ 80% of fishers in the country. We all share a vision in which these fisheries can sustain the livelihoods and nutritional needs of fishing communities for generations to come.

It is not too late to stop the decline of a regional fishing nation.

Working together, we can restore Ghana’s fisheries to their former glory. 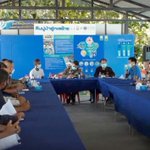