Monrovia – In May 2017, during the last year of former President Ellen Johnson-Sirleaf, the European Union (EU) issued Liberia a yellow card, identifying it as not cooperating in the fight against Illegal, Unreported and Unregulated (IUU) fishing.

In recent years, the Government of Liberia (GoL) and the EU have been working behind the scenes in hopes of removing the yellow card. In fact, on December 12, 2015, Liberia and the EU entered into a Sustainable Fisheries Partnership Agreement (SFPA), established the principles, rules and procedures governing the conditions under which Union vessels may engage in fishing activities in the Liberian fishing zone, economic, financial, technical and scientific cooperation in the fisheries sector with a view to promoting sustainable fishing in the Liberian fishing zone and the development of the Liberian fisheries sector.

The two parties also agreed to cooperate on the management, control and surveillance measures in the Liberian fishing zone with a view to ensuring that the rules and conditions are complied with and that the measures for the conservation of fish stocks and management of fishing activities are effective, in particular, the fight against illegal, unreported and unregulated (IUU) fishing partnership between operators and aimed at developing economic activities in the fisheries sector and related activities, in the common interest.

The Liberian government, through the Director-General of the National Fisheries and Aquaculture Authority (NaFAA), Mrs. Emma Glassco says it is making headways and hoping that the EU will see reason to lift the Yellow Card. “Lifting of the yellow card will boost Liberia fishing and maritime economy and attract substantial investments in the fisheries sector as the EU market is the closest and biggest to Africa,” the NaFAA boss told FrontPageAfrica this week.

While NaFAA says it is working to address the shortcomings identified in the notification from the EU and is optimistic of full implementation of the IUU Regulation and the imminent signing of the second round of the SFPA, the delay in lifting the ban is causing some jittery.

NaFAA says in the months since the Yellow Card came into effect it has been working toward withdrawal of the notification which has relegated Liberia to a non-cooperating third country in fighting Illegal, Unreported and Unregulated (IUU) fishing.

NaFAA says the continuous monitoring of Liberia’s progress in the fisheries sector by the EC and provision of guidance against shortcomings experienced in the past is all the more reason the ban should be lifted.

NaFAA says in its effort to rectify the shortcomings identified by the EC, it has been working in accordance with the action plan to rectify the shortcomings and has been successful in providing an Act to Amend the National Fisheries and Aquaculture Law and Adding thereto Management and Development;  Act of 2019 was passed by the Legislature. Approved by the President on November 26, 2019.

A recent gap analysis is currently being conducted by NaFAA to update the 2010 Fisheries Regulations to conform with the Fisheries and Aquaculture Management and Development Law of 2019 and efforts are underway to established a new Transshipment Unit for the purpose of efficiently monitoring all distant water vessels engaged in fishing activities as well as for the issuance of both transshipment authorization and annual license. 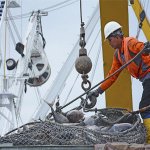