Today, the Environmental Justice Foundation (EJF), Oceana, The Pew Charitable Trusts, and WWF welcomed the European Commission’s warning, or ‘yellow-carding’, of Thailand for not fighting illegal, unreported and unregulated (IUU) fishing. Thailand is the third-largest seafood exporter in the world, with exports valued at €7.8 billion in 2012. In 2013 the European Union (EU) imported €736 million worth of seafood from Thailand.

After months of bilateral discussions, Thailand has not sufficiently addressed its shortcomings in combating IUU fishing and is alleged not to be complying with international fisheries law. The yellow card represents an opportunity for Thailand to take more decisive action in the coming months and avoid a red card, which would ban Thai seafood imports to the EU.

“Yellow-carding has been proved to be a strong incentive for states to combat illegal fishing. Commissioner Vella has shown global leadership in implementing the EU’s tough illegal fishing regulation against such a significant fishing state” said Tony Long, director of The Pew Charitable Trusts’ Ending Illegal Fishing project. “Thailand must now take positive action and work with the European Commission to be delisted.”

“Thai authorities exert very little control over their fishing vessels, with many activities illegally damaging fish stocks and the marine environment, and this is linked to some of the most exploitative and inhuman working conditions documented anywhere. These conditions include the use of slaves and extreme violence” said Steve Trent, Executive Director of the Environmental Justice Foundation.

Thailand recently adopted measures aimed at protecting workers in the fishing sector. The real challenge, however, will be to ensure the laws and regulations are enforced.

“It is time for the Thai government to take swift action to control the Thai fleet and end this environmental and human crisis” concluded Steve Trent.

In addition to the yellow carding of Thailand, the Commission has also lifted the threat of sanctions against (delisting) South Korea and the Philippines. This is only the second time the Commission has delisted any states, and is further evidence of the positive and motivating incentive for states to adopt measures to stop illegal fishing. Both states had previously been yellow carded, South Korea in November 2013 and the Philippines in June 2014.

Trouble in the waters - #Fiji re-registering Fishing Boats deemed to be #IUU (Illegal, Unreported and Unregulated) or pirate fisher. 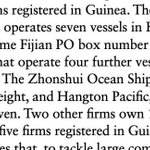 The impact of #IllegalFishing is not small.

Our work in #HongKong is having an impact.

On 11 Dec @VSinkevicius presents his zero-tolerance vision on #IUUfishing and the EU’s way forward.