Illegal, unreported and unregulated (IUU) fishing is prolific in many fisheries worldwide. As a response, some countries, trade blocs and Regional Fisheries Management Organisations (RFMOs) have developed import control and catch documentation schemes to deny market access to products sourced illegally. However, the schemes in existence today differ in how they operate and what information they request, resulting in loopholes which IUU operators can exploit, and a lack of clarity and additional bureaucratic burden for industry.

Successfully tracing a seafood product through all relevant stages of its supply chain requires information on key data elements (KDEs) which correlate to a seafood product’s who, what, when, where and how. The Environmental Justice Foundation (EJF), Oceana, The Nature Conservancy (TNC), The Pew Charitable Trusts and WWF (the EU IUU coalition) today launched a report which highlights 17 KDEs that should accompany any fisheries product that is imported into a market State and that form the basis of any robust import control system. These KDEs include, but are not limited to, the vessel’s flag, catch area, International Maritime Organization (IMO) number, fishing authorisations, transshipment declarations, unloading ports and catching methods.

The EU introduced its catch documentation scheme in 2010, covering all marine wild caught fish traded by non-EU countries into the EU market. The United States introduced its own import controls, known as the Seafood Import Monitoring Program (SIMP) in 2016, which covers 13 types of seafood identified as the most vulnerable to IUU fishing and seafood fraud. As other countries begin to develop their own systems, most notably Japan, it is vital to understand the benefits and disadvantages of these diverse systems operating today.

The report compares the EU and US import control schemes, as well as measures by RFMOs, against the 17 recommended KDEs. While the EU currently requests 13 out of these 17 KDEs, the US requests 12. Japan has not yet set up a targeted and national import control scheme, but does comply with the KDE requirements of four RFMOs, namely ICCAT, CCAMLR, CCSBT and IOTC. The assessment shows that the EU and US systems are 59% aligned with each other, demonstrating a clear opportunity for greater harmonization and information sharing between the world’s two largest seafood markets. Stronger alignment between these systems would be beneficial for fishers and supply chain actors who currently sell or process catch for both markets, or may seek to do so in the future, reducing the cost of complying with multiple systems.

The official presentation of the report will take place during the EU IUU Coalition’s event “Advancing seafood traceability and transparency in the EU: the importance of robust data collection and management schemes in the fight against IUU Fishing” taking place on 8 January 2020 at the European Parliament.

“All the evidence makes it abundantly clear that more must be done to combat illegal fishing if we are to prevent further declines and catastrophic collapses across fish populations. This new report highlights how improving the collation of information and exchange of data can assist in vastly better, more robust, import controls. It shows how simple, cost-effective measures–such as mandatory IMO numbers for catch vessels and fully digital control systems to facilitate rapid exchange and cross-checking of key data–can revolutionise the ability of markets to exclude illegal products driving better management and with it truly sustainable, legal and ethical seafood.”

“Together the markets of the EU, US and Japan account for 64% of the total value of the world’s trade in seafood. These markets should work together to stop illegal fish from ending up on their citizen’s plates and to prevent seafood mislabeling. Efficient information exchange and electronic catch documentation schemes that allow for the cross-validation of key data is crucial.”

“As more countries, trade blocs and Regional Fisheries Management Organisations adopt their own import controls to fight IUU fishing, it is vital to understand the positives and negatives of existing schemes. We ultimately want to see markets adopting import controls which cover all species, requesting the 17 KDEs outlined in this report, thus enabling data exchange and more effective trade flow between markets.”

“Simple but robust import controls and traceability requirements are at the heart of combatting illegal fishing practices. They put pressure on unscrupulous operators while protecting those adhering to the rules. Understanding and implementing the data that underpin effective catch documentation systems and being prepared to share these data sets will help transform the fight against IUU fishing and in doing so protect the environment, the consumer and the legal fisher.”

“Better unified controls on seafood imports into main markets are needed to prevent IUU fishing products from being redirected into regions without proper measures in place. When market States and Regional Fisheries Management Organisations harmonise their approach to import controls, both the market States and nations exporting their seafood benefit, as a universal understanding of the fisheries value chains minimises the need to comply with multiple systems which don’t align, while supporting sustainable blue economies and thriving fish populations in our ocean.”

Read the full report﻿ (in English)

Read the full report (in Spanish) 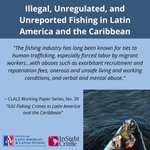